You are here:
ChangeDynamic Patterning 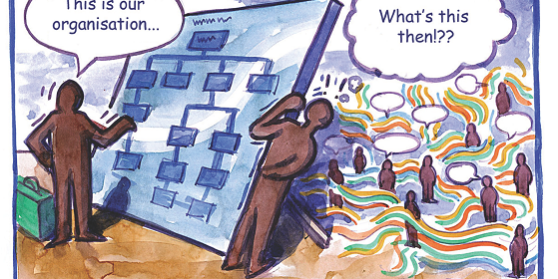 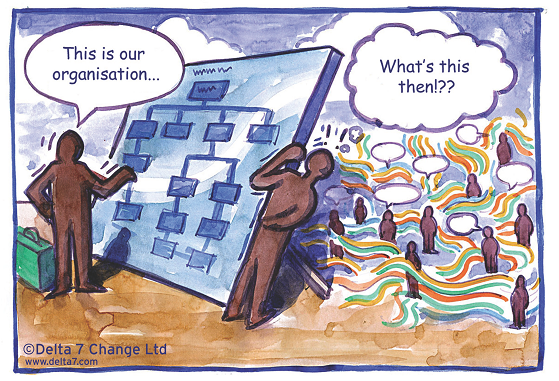 Whether you’re thinking about a re-organisation or you’re in the middle of one, it’s important to remember that it’s about much more than tinkering with the org charts. Here are 3 vital things to keep in mind…

An organisation is so much more than just what’s on the formal structure chart. Informal social networks (not just the online ones) play a vital role in how people get their work done.

Structures can be changed overnight, but people take time to transition. People need time to let go of the old, the familiar, and to find their way with what is new and unfamiliar.

Those of us involved in restructuring need to pay as much attention to supporting that transition as we do to making the change to a new structure, or new ways of working. Change often doesn’t start on day 1; it only starts when the people involved have successfully made their transition.

Changing formal structures or ways of working can have unintended consequences that simply cannot be predicted ahead of time – no matter, how well you’ve planned for the change.

TIP: People often think that the risk with organisational change is the organisation not changing. But at least we know where we are then. There’s far more risk involved when change DOES happen – because that’s when small things can have unexpectedly large consequences. (This is known as the ‘butterfly effect’).

During change we might find unexpected tensions developing between teams, or within them. We might find people interpreting new ways of working very differently from one another, and heading off in different directions. We might find that some individuals and groups make a very fast transition, yet others don’t. We might find key people taking their eye off customers or competitors because they’re absorbed in the internal changes within the organisation.

These are all examples of patterns which might emerge during change. And we need to know about them, the sooner the better, so we can take informed, responsive actions to build on potential opportunities or mitigate potential problems. Paying attention to the Dynamic Patterning in change can help us find about these emerging patterns of change sooner, so we can act sooner.

This blog post draws from an article I wrote Restructuring in a complex world for the Institute for Employment Studies. Just click on title if you’d like a copy of the full article.

Or, you can download the complete IES Report ‘From restructuring to rebuilding’ for free. The report includes articles on using social movement to enable large-scale change and

Once again, a big thank you to Delta7 for their fantastic picture.